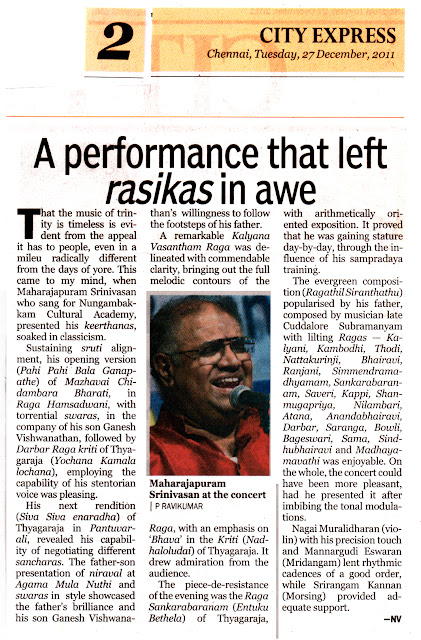 Posted by Maharajapuram S.Ganesh Viswanathan at 10:34 PM No comments:

Posted by Maharajapuram S.Ganesh Viswanathan at 10:27 PM No comments:

Mayakkam Enna – The Mesmerizing truth of life in a Genius 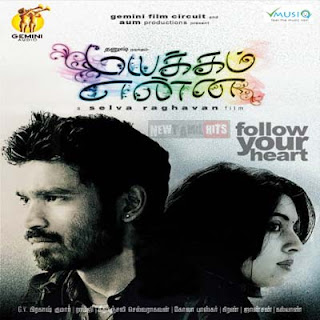 Mayakkam Enna – The Mesmerizing truth of life in a Genius
The chance to lead a life as a human being provides plethora of opportunities that powers our preferences and discretion. Not everyone in this opportunity of life has been endowed with a gene of a genius in the right perspective. It is an important characteristic that distances and distinguishes the great from the good. The concept of life is thus rather unique in its own set of parameters of evaluation. A genius is one who doesn’t crave for attention and appreciation but rather the individual who naturally deserves it without an iota of doubt. The plot of Mayakkam Enna revolves around the two centric characters Kartik Swaminathan ( Dhanush) and Yamini ( Richa Sharma) whose struggle depict the honest battle of a genius in this vicious world. The character of Kartik ideally represents the eccentric attributes of a genius whose contemplations are enlightened by virtuosity and versatility. The portrayal of this character could be analysed on multiple dimensions but I would rather throw attention and focus the realistic principles involved in this genius personality.  Kartik has been uniform in his priorities and motto of existence from the start till the end. Kartik’s ambitious goal to be a great wild life photographer and the course of uncertain events that possibly poses obstacles in his ambitious path are very common in the life of any genius. The initial scenes reveal the background of Kartik’s upbringing along with his sister who lives in the support of their friends. The entry of Yamini is rather initially conceived on expected lines but traverses on an unexpected path of expectations. Yamini is being introduced to Kartik by his friend Sundar as his Date mate but destiny leads Yamini to profess interest in Kartik and marry him eventually. Yamini plays to perfection the role of an inspiring life partner to Kartik. 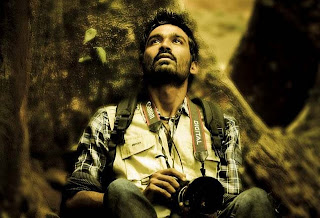 Kartik on account of his interest in wildlife photography approaches an acclaimed wildlife photographer Madesh Krishnaswamy for technical guidance. Madesh as a character plays an interesting role of a cynical individual who is devoid of any professional and moral ethics indicative of many vicious personalities in any acclaimed profession. Madesh assigns a task of  capturing Wildlife Birds to Kartik in to order prove his competence as an able prospective assistant to Madesh. Kartik embarks on this mission, where his friend  Sundar and Yamini accompanies him. Sundar sights this trip as an opportunity to increase his intimacy with Yamini but the trip unfortunately to him goes the other way round bridging a more formidable relationship between Yamini and Kartik. Yamini reveals that she isn’t interested in framing a permanent relationship with Sundar whom she calls a drunkard. Kartik perplexed by Yamini’s Statements couldn’t digest this and tries to distance himself from Yamini in respect of his true friendship with Sundar which ends up in total vain. Meanwhile Kartik submits his photographic assignments to Madesh who disgustingly calls it a form of excretory waste. Kartik gets emphatically dejected by Madesh’s abusive remarks and ends up in a wine shop wherein he gets intoxicated severely. Kartik gets a telephone call from Sundar who pleads him to help Yamini who was stuck with her immobile car amidst a heavy downpour. Eventually Kartik undertakes the responsibility and arrives at a bus stop where Yamini was waiting for assistance. A very hazardous act of driving in an intoxicated state is being practiced by Kartik which Yamini sights as a reason for not accompanying him back home. When Kartik offers the driver’s seat to Yamini she rejects it claiming her incompetence to drive a bigger car, which she is not used to. Kartik laments to Yamini about his showdown with Madesh and his absurd remarks, wherein Yamini attempts to hug him and when they were about to venture it with more intimacy, an interruption in the form of Telephone call from Sundar arrives into picture. In this telephonic conversation Sundar opines that Yamini wants to communicate something to Sundar in the presence of Kartik the very next morning.  Kartik with a sense of guilt for betraying Sundar by wooing his girlfriend elopes to Mysore all of a sudden shredding all communicational ties. Everyone is tensed and panicked by this sudden uninformed absence of Kartik , who has been dejected and disgusted by Madesh’s comments on his photography.  Kartik after a day switches on his mobile phone wherein he realises that  all of his close friends  have flooded his inbox with voice messages questioning about his sudden disappearance . Yamini too pours her concern over the sudden absence of Kartik and states that Kartik’s Photo has appeared in the National Geographic Magazine. Katrik is pushed into a complete sense of mayhem wherein he finds his Photo in the magazine with Photography credits attributed to Madesh Krishnaswamy.  Kartik returns home totally dejected and Yamini hugs him stealthily and this action accidently is witnessed by Sundar and his friends circle. Sundar unable to digest this fact reprimands Kartik and proposes not to talk with him further. After the intervention of Sundar’s father into this issue, things gain more clarity resulting in the marriage of Kartik and Yamini. Meanwhile Kartik attempts to talk with Madesh on the publishing of his photo and pleads Madesh to reveal the truth behind the photography credits. Madesh cynically avoids Kartik with disgust and forcefully pushes him out of the shooting spot where Kartik attempts to communicate with Madesh. 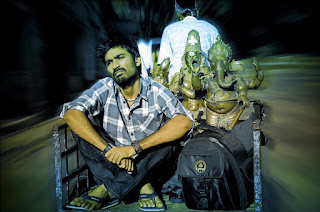 On a fine morning Kartik realizes through an article on a newspaper that his photo under the falsely attributed authorship of Madesh has won a prestigious award. Kartik who reads this news story at a balcony, collapses and gets severely injured in his head. This scene could be sighted as a  case indicative of the narrative transition into a stage of disequilibrium and as a visual metaphor forecasting the sequence  of disastrous consequences which Kartik is about to encounter. Kartik goes insane and loses his senses. He torments Yamini with his fiercely lunatic attitude and behaviour. Kartik ends up consuming liquor without a restriction, stoops down to capture pornographic images on account of his desperation and mental ill health. He as well hurts Yamini who was then preganant. The couple eventually lose their first issue due to the insane response of Kartik  to watching a television interview where Madesh Krishnaswamy elucidates on how he captured the image of the wild bird, which in reality was a photographic creation of Kartik. Yamini totally shattered by this action, decides not to converse with Kartik hereafter, but sends every photographic creation of her husband to reputed Print Media Houses. On account of such untiring efforts by Yamini , Kartik ‘s photo appears on the Tamil Magazine titled Kumudam providing him a great breakthrough into the industry and earns him the necessary avenues to fulfil his life time ambition. Kartik in  a few years advances in his career with accolades and appreciation from all quarters. The ultimate moment of this film is the climax where Kartik emerges victorious and earns the coveted International Best Photographer Award amidst heavy competing entries inclusive of his own Photograph which has been falsely attributed to the authorship of Madesh Krishnaswamy. Kartik after thanking all his friends for their role in his successful ventures throughout his career in the awards ceremony moves to exit the stage, but he suddenly comes back and shares that his inspiration and sole pillar of support through all thick and thin was his wife Yamini whom he addresses as his Iron Lady. The climax scene literally influences everyone to tears where the director must be certainly applauded for creating such a realistic vision on how an achievement by any genius of any profession is being recognized by his entire professional fraternity.
There are quite a few lessons we learn from this Film on the notion of Talent and technical virtuosity being recognized in the true sense. Talent and virtuosity can never be disrupted unless it is forcefully neglected by the potential individual who is in possession of a such a luminous ability. Genius individuals though projected as eccentric and exuberant personalities have a hyper sensitive attitude towards their professional practices. They can never tolerate any sort of backstabbing and cheating which gives undue credit to another individual who tries to elope away of their intellectual creations and exhibitions. There is always a woman behind any successful Man of any profession and proves to be certainly valid through the character of Yamini. Yamini’s role has been very well handled by Richa Sharma who can never be considered as a debut heroine with reference to this Film. She possesses all the characteristics of a promising actor who can truthfully represent any character on screen. Another noteworthy contributions is the effective Background score and Musical tracks of G V Prakash which add strength  and momentum in the character delineation and story Narration. The most fascinating element is that of the Cinematographer Ramji, who does full justice in the scenes that reveal the various photographic experiments of the protagonist Kartik. As an ardent follower of the norm of watching films on an academic perspective, I would certainly applaud Director Selvaraghavan’s portrayal of the  Mesmerizing truth of life in the  Genius character of Kartik Swaminathan.
Maharajapuram S.Ganesh Viswanathan
Posted by Maharajapuram S.Ganesh Viswanathan at 12:13 AM 1 comment: